Just as everybody in this household is taking it for granted that I am all fit and healthy all year long, and they were all happily packing away to go for a short break, I decided to pull a quick one. Its a given anyway. I deserve extra attention once a year. And to get that, I must fell sick...(and err... I kind of promised myself to do this anyway) 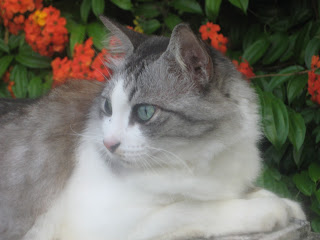 I perched on the study table and stared and stared...halooo,look at me!!!! but they were so busy zipping and unzipping the bag again and again and didnt notice my staring at them with a crooked smile until the very last minute.

And Adik shrieked!!! Huh,at last I got your attention!.....Yes, my lower canine tooth was falling out okay...it was juuust hanging on and kind of pointing out to one side already, causing the crooked smile as I couldnt close my mouth properly by then. And Mama shrieked even louder when she saw it. They fussed and fussed about me and I loved every minute of it!!
The BIG questions were, was I in pain? Should they go ahead and try to pull it out? Was any of them brave enough to do that?
No answer to any of those...
They wanted to consult Abah  who had  flown a day earlier to do some work, but decided against it as it was very late already. Abah must have gone to sleep. Mama then went online in search of advice and instructed Adik to look for signs of:
Alhamdulillah, none of it....From the net, Mama deduced that if a cat has teeth that are falling out, it can either be a completely normal process or one indicating that an underlying health condition exists.
They decided to deal with it tomorrow, kissed me goodnight and allowed me to sleep with them. YES!!!

I slept soundly but I know Mama didnt, because she had learned so much from the net just then and she was feeling guilty!!! The vet did check my teeth when we go for our yearly booster but he never said a thing about brushing teeth and Mama, ignorance in many things as she is, never seen anyone brushes cats' teeth in her life!! 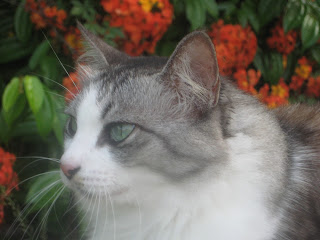 Morning came and it was very chaotic. They had to catch their flight around noon but I was the priority here!! Matter was made worse when Abang called early in the morning asking Mama could she please send him a towel! He said he has been borrowing a friend's towel for the last few days...Mama was beyond shock!! ( biasa la mama kan, drama queen sokmo!) How could he leave towels behind? Personal hygiene ranks very high in Mama's list, so she didnt take it very well when Abang said to just bring the towel when they come to visit .(Abang said that after Mama exploded) 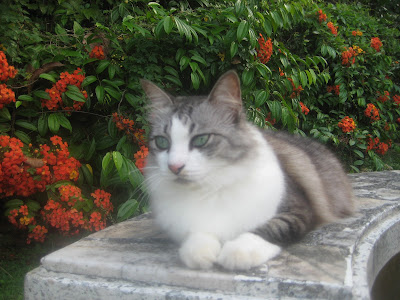 Well, in my opinion, Abang shouldnt be blamed. It was frantic the day he left. On the first day of  Eid-al-Adha we slaughtered 2 cows on our backyard , shared mostly with Abah and Mama's siblings. So, you can imagine the full house with cousins ( an occasion very much enjoyed by Abang and Adik of course) and the works that followed after. Abang helped out a lot. Yes, it was a yearly affair and Abang is quite adept at it by now but still, his room was a mess as it was used for male cousins to lepak, change and pray. He had tried to gather all his things but still...And his flight back to Penang was very early the next morning.
So, Mama became very stressful and snapped at Adik at every single mistake she made...kesian adik.

The vet was closed and so were the courier companies as it was the birthday of our beloved Sultan. Many calls were made and to cut the long story short, a back-door transaction(shhhh!) was finally made with a courier agent. A visit to the famous pet shop of Kubang Kerian and a chat with the ever friendly and knowledgeable owner saw Mama heaving a relief sigh . He calmly assured Mama that it is an entirely normal aging process.

Just before noon, I was  left with the neighbour who is as crazy about me as my own family with loads of premium wet food together with a  what-to-do/ watch-out  list.
They barely had time to catch the flight...and off the went to KUCHING, of all the places!!
I am very satisfied to know that they didnt really enjoy their time there as there were too many reminders of me...heheheh. Mama even updated her fb status with: In Kuching and missing our kucing!!
Ok folks,I need my beauty sleep now...so long!!

Kak Nor, do come to my walimah this 24th. Bring Adik. And you could come visit Abang as well. :)

When we went to Kelantan, my dad showed your husband's clinic. I felt like we were close already. It would be great to meet you in person. :) My dad said he would (or already have) invite your husband, Ustaz Razif and his other friends in Kelantan, but if he hasn't, I'm inviting you myself. :)

And please make doa that everything goes well. Jazakallah. :)

Alhamdulillah, your time has come!!! And so soon after your brother's.. Double happiness for your family MasyaAllah!!
Would love very much to attend but we are already going to Penang tmrw morning 16/12 huhu..
Plus, we have made arrangement to go out in Masturat jamaat for 3 days starting on 22nd.
InsyaAllah I'll be making special doa for you on the path of Allah...

Err..maybe your dad confuse my hubby wit sumbody else as he's still serving in HUSM, so, takde clinic...and do you know that Ust Razif tu my hubby's brother. Hubby is Dr Suhaimi.
Really hope to meet u one day...