Abang's coming home for Raya this year was uneventful, Alhamdulillah. He arrived around 11a.m, thus having ample time to drop at  Tok Ayah Wahab's on the way home from the airport. Next destination was to the mosque where Abah confined himself for i'tikaaf as he had been sending numerous text messages   reminding me to bring Abang to see him before going home.
And with Abang home, as expected, all carefully planned healthy meals disappeared!! We were back on rice on that day itself as Abang said he dreamt of Mama's Nasi Lemak with Ayam Goreng Berempah the night before! And the dream happened to has a continuation with the list of food items  getting longer and longer. Adik, ever the cheeky one, tried to capitalize on it by asking Abang to think/dream of several other types of food not included in Abang's list!!

And oh, I must stated here  too,for the records ,that the last Ramadhan was the first Ramadhan I prayed Taraweeh with Abang as imam. Awesome!! ( a bit funny too as Abang didnt memorise the taraweeh du'a yet and he kept asking to make du'a and he and Adik amin-ed it) 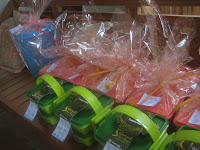 With your presence too,Abang, the festive mood started to creep in. Before that, Adik was bent on studying for her UPSR, but now that you're home, all revisions considered done!!  All you two did were talking, playing, giggling, talking again...all day long! Okay,okay,  so you did help  vacuuming, dusting  and  wrapping the eid gifts for uncles and aunties, which Adik enjoyed so much. She wrote cute eid wishes and drew silly pictures and stuck them on the packages.Abang laughed and thought that his sister is the cleverest and funniest girl in the whole wide world!
We got many gifts too and the one that I like best is this; 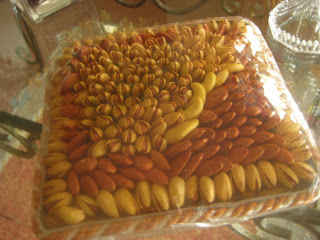 This Nut Tray came all the way from Tehran...Thanks so much Kak Ni. Definitely the best gift for a nutcracker like me!!
On the eve of Eid, we gathered at Tok Ayah Mustafa's and recited the whole Qur'an as a gift to Mama's late grandfather. Tok Ayah Pa has more than 10 sons + grandchildren whom are huffaz but not all were present on that day. So, we divided the parts amongst us and Abang alone recited 3 juzuks ...Alhamdulillah. I hope this practise of giving will continue in our home forever, InsyaAllah.
We didnt hold our customary 3rd Syawal open house this year as all the clan of Hj Mustafa headed to Kuala Trengganu  on that day to celebrate your cousin's, Kak S, wedding.
This is one wedding I would like to remember and refer to when the time come for your turn. ( Adik naturally, screaming when I mused aloud about it...she went,'"Mama! but I'm only 12!" . And I went, "Its not wrong to plan early la Dik"!)
Ayah Yie and  Cik Ninie went to great length to ensure  that the nikah and walimah , which is a form of ibaadah, stay true to its meaning and serve the purpose, that is to close the door of those shayateen.

An 'aliim once said in his lecture, instead of closing the door to those doomed creatures, most people actually invite them to join their feast. How? By indulging in extravagance that lead to wastage, thus joining them together in a brotherhood ties... By mixing of non-mehrams during the feasts, by blaring music and by all those traditional practices so rampant in our society that has no basis whatsoever in Qur'an and Sunnah.Not to mention the exposure of auraah and being made-up by transvetite make-up artists.

They began with a simple invitation card printed on regular papers. Stick To Sunnah  was the theme, so it was keep-it- simple and no-waste all the way. I especially like the way they printed the card: 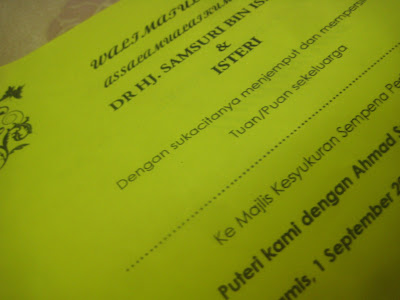 Ayah Yie kept out his daughter's name as she is a strict niqaabi who started observing the niqaab as soon as she reached puberty.  Everything about her is considered a 'secret',so well-hidden, yet jodoh found her at the age of 18. An 'alimaah, she is an exemplary young muslimah both in ibaadah and akhlaaq. I always pointed it out to Adik that, she's the one to look up to, to imitate and to admire.
The banquet area was totally separated for male and female with no male attendant at all in female area. (What always happen everywhere are, the area may be separated but there's always male attendant refilling the dish, collecting the plates and glasses etc.) As many of the brides friends and students are strict niqaabis, they were able to eat and talked freely. Well, it might not be a big deal for most people, but it is for me...
They spent very little on dresses and made no fuss on hantaran thingy. Yet the bride shone...and nobody were too interested to look at those gifts (because no emphasise were put on those) or asking questions  as per usual in weddings everywhere.Alhamdulillah...lots of du'a for newlyweds were heard that day...I  now thought of it as a successful walimah and making azam to emulate it when the time comes....

Let us pray again for their good life together showered with mawaddat and rahmat from The Almighty,Amiin....
Posted by Elham at Monday, September 26, 2011

Salam Kak An. As always... a very interesting read, enjoyable and inspiring especially the part about the walimah. Congratulations to the newlywed and your whole family. Barakallahulakum.

ps My phone broke down 2 days after Eid, lost your number too. Alhamdulillah I can still use my old number.

I meant to call you since yesterday, tp tak jadi-jadi...wil call you now!!

Errr, K.Has...I'm sorry we didnt get to go your house on Raya. S did tell me that you invited us when you met at Balai Islam hari tu...tp, biasalah, 1st and 2nd day of Raya every year,must be spent at both parents...kami ramai adik-beradik, so masa ni lah saja dpt jumpa semua.

It's the type of walimah that I crave and dearly pray for despite all the expectations of the society that says otherwise. Could you please make doa for me as well? So that I could have one like your niece. And hopefully, at least receive half of the barkat that she and her family received.
Jazakillah.

InsyaAllah Azie... May Allah gives you and family the taufeeq to go against the flow for the sake of upholding the sunnah...and I'm praying that 'the time' is coming soon too!!

A very interesting and enjoyable read thank you for sharing..

Thanks for coming and reading me...been to yours and gained a lot by reading you...thanks for making me find u.

Asalamu alaikum
Your welcome
Nice blog , have you read "Always Be Truthful" my latest bloglet.
Feel free to follow/comment

As salam. Stumbled upon your blog. Very interesting. When you talk abt KB, I feel like I'm back home! Anyway, I was born in KB, raised in P Puteh, been in KL for the past 31 yrs. Whereabouts in KB?? Do give me a visit too.

We are in Kubang Kerian now, quite near to the HUSM where my hubby serves.

Thanks for yr visit. I find yours very interesting with that touch of humor - never fail to make me smile! I do wish so much to have such a wedding for my daughter (she's in Surabaya - pesantren Darul Az-Zahro). You just put all my thoughts to words (abt the blaring music, the transvestite make-up artist etc, not to forget, missing Zohor prayer sbb dah siap mekap pagi-pagi lagi)!

We r actually in Chicha which is between P.Tumbuh and HUSM!! Dah dekat sgt tu...
InsyaAllah your daughter's walimah will b a better one with more acts of sunnahs perfomed...no less should be expected from an alimah graduated from a famous pesantren.