I'm so glad Abah planted these Kemunting bushes, seeing them bear fruits, and thus, afforded me with another entry. Truth be told, I have ran out of things to write!! But  write I must as I have promised Adik to post at least one entry per month. So Adik, be sure to appreciate this effort ya!! I do it solely for the love I have for you...and Abang of course. 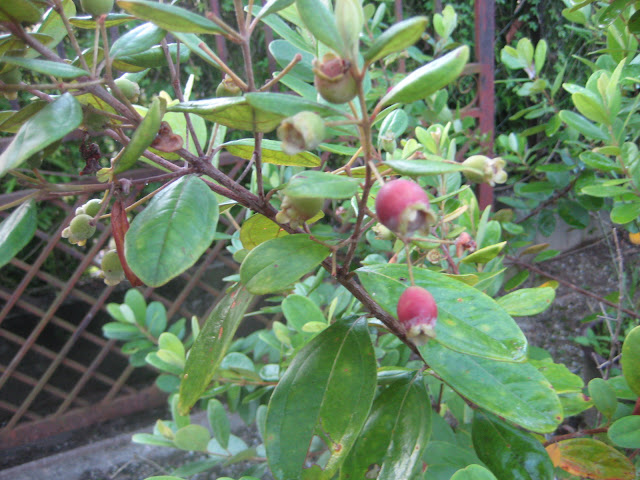 So, these are our Kemuntings  that Abah is so proud of and we are so fond of...we and the birds!! And seems that they always won the race of reaping the ripe fruits. As a matter of fact, we only managed to get our hands on those scrumptious berries  recently despite the fact that they have started fruiting for the past few months.
After long hot months, the rain came and all kinds of flowers and fruits came out to celebrate the gift from God. Having lots other choices of delectable to select from, those naughty but cute birds at last decided to leave the kemunting alone....baru lah kita dapat rasa!!
Anyway, despair not. We, or errrr.. maybe Abah alone ( for he single-handedly planted that while Mama looked on with sceptical look) gets the sadaqah pahala for all those fruits eaten by the creatures of  Allah.
Kemunting picking was Mama and Abah's favourite pastime in our childhood. We eagerly waited for the season each year and went about it most fervently. Many a time, it resulted in we  being scolded by our concerned parents as time tended to fly away when we were at it. They would be worried sick as dusk approached and we were still at the foothill, gathering those ripe berries.( Being 'hidden by the genie' was the order of those days as compared to being abducted/raped by so many sick people of today.)
As you, Abang and Adik, are so fond of listening to our childhood stories but cant really connect with what we went through as a result of this rapid development that has taken away all those bushes in our respective kampungs, Abah decided to plant this Kemunting....as well as teaching  you how to play all those traditional games that you two enjoy enormously.
Abah got the seedling during one of our weekend getaways in a small resort off Cherating white sandy beach. I didnt know then that Kemunting could grow on sandy soil too. When Abah scooped it up, after asking permission from resort's owner, I was quite sure that it wont be suitable for the soil  around our home . And when it struggled to grow at a snail pace, I 'advised' Abah to give up...but true to his 'healer's personality, Abah persevered....Tending it with love and care (read: put fertilizer etc) with Pakcik Noor's help of course.
All of a sudden, lovely pink flowers started to come out and soon enough, small berries followed suit, profusely so too!!
And following the tradition initiated by Abah, the first juicy fruit from any of the trees in Abah's orchard was always presented to Mama....and MasyaAllah,in this case, it was soooo sweet!!

Mama sheepishly said ' Thankyou...' and Abah beamed with satisfaction!! ( of being able to show the  berries to you two and...also I suspect, of being able to prove that Mama was  wrong!)
Abang and Adik, please take care of the bushes ya!!  InsyaAllah...one day your children will get to see them too.
Posted by Elham at Thursday, July 15, 2010

Abang & Adik,
Your Abah and my Papa have one thing in common. They have green hands, alhamdulillah! :)

I guess this is how my mom feels when she tells us stories of her hanging on a tree, playing with the buffaloes and using biji pokok getah to play congkak rather than marbles. Lucky that you got the kemunting. Old memories will be revived and continued. :)

Abah and mama definitely have better chilhood as far as playtime is concerned....all those environmentally-friendly activities, muscle building,siblings bonding, the list goes on.....