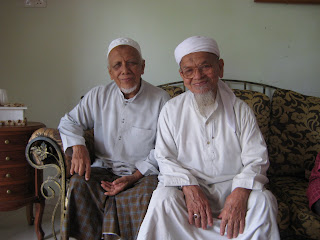 When Adik was 5, Abah introduced Adik to Seerah, albeit a basic ones. So, Adik went around repeating in a sing-song way, "Nama nabi kita Muhammad, mama nabi nama Aminah, abah nabi nama Abdullah....." One day, Adik came to Mama and asked,"Mama, tok ayah nabi nama cikgu aper?". Mama was like,"What?...cikgu, what cikgu?" And Adik, patiently, repeated the question, slowly and deliberately, as if Mama is the ' slowest' person on earth. "Ye laaa...Adik kan ada dua tok ayah, satu Cikgu Abd Wahab and another one Cikgu Mustafa, sooo, Rasulullah must have two tok ayahs as well, right.., what's their name, cikgu aper??" Mama laughed till it hurt..... Needless to say, Seerah then became one of the subjects that Adik loves and excels in. More often than not, she'll get full mark for this subject in every test/exam. Ask her any dates/events from the life of our beloved prophet, (only from year1 to year 3 syllabus laaa) she'll spell it out effortlessly. And Adik loves her two tok ayahs very much. And they her....

Both tok ayahs are cikgu pencen, known in their respective kampungs as Cikgu Wahab and Cikgu Pa, both in their 70's and both are prone to spoiling all their grandchildren. Luckily for you, Abang and Adik, you are the only two small cucus staying close to them. So, you get to manja2 more....but, more importantly, you get to serve them more, especially now that they are in their old age and get sick every now and then. Both of them appreciate your small fingers massaging their old bodies anytime....And Tok Ayah Wahab will exaggeratedly compliment your effort as usual, thanking you profusely and hugging you tightly. All these will be memories one day.......

Both tok ayahs are on medication for hypertension, but Tok Ayah Wahab had had a minor stroke before, so , his medication container is bigger than Tok Ayah Pa's. Recently, both of them suffered from gout almost at the same time. Yes, they do have so many things in common. Both of them like to stay put in their own home despite 'appeals' from their many children to go and spend time with them , mostly in KL and a few in Perak and Trengganu. Of course, the criteria of the house to be considered staying for a few days must be a walking distance from a mosque/surau, otherwise it will be refused point-blank. Tok Ayah Wahab now gives excuse not to travel because of frequent urination. He never want to 'menyusahkan' anak2 even though all his children would be more than willing to do anything for him. He will not let Tok, (whom he married after the demise of your real Tok that you didnt get to meet), call his children if he falls sick, but Tok would do that anyway, as we made her promise to call us even if he as simple as having a sprain ankle or just a toothache (extracting a teeth is not a simple process for him as he is on warfarin), or something like that....(I really dont know what is simple 'sickness' for old people.) As for Tok Ayah Pa, he divides his time to three parts, one for Allah, another for his household which now consist only of himself, Mak Tok and Ayah Su, and the rest for himself. So, we wouldnt find him at home for a total of 4 months in a year as he would be spending it on the path of Allah. He usually do it in segments ie 40 days at a time for 3 times in a year. He comes home, spend time with Mak Tok and goes again. Tok Ayah Pa had been to every nook of Malaysia and to quite many parts of the world as well on his da'awah mission. (Tok Ayah Wahab also went on several similar journeys prior to his deteriorating health) His dream is to die in one of his journey and had repeatedly told Mak Tok that his body must be buried wherever he dies. Whenever he's home, he and Mak Tok, much to their children amusement, despite their old age, are very much a loving couple.....Mak Tok always say, if not for his khuruj, Tok Ayah Pa would be a katak bawah tempurung as he would only know Kelantan where he had taught in many schools all over the state as he really doesnt like to travel,what more, without Mak Tok.

Whenever Abah and Mama had to go some places where we couldnt bring you, both of you will gladly choose to say with Tok Ayah Pa, or to be with the 'sporting' Mak Tok to be exact. Adik would dig into Mama's childhood, trying to find out whether Mama was a good or a naughty child and would use the info to kena kan Mama balik whenever Mama tries to give her a 'lecture' on good behaviour. She would repeat the anecdotes concerning Mama she heard from Mak Tok and Tok Ayah over and over again. According to her, Mama was a cry baby and Tok Ayah said Mama was special as Mama was the only child who would lovingly go and hug Tok Ayah while all other siblings went into hiding whenever he got angry with our antics. I somehow do not remember that......

So, Adik and Abang, do enjoy the time you still have with them. Take the opportunity to do as much khidmat as possible to them. Make them happy.........Tok Ayah Wahab is always happy to listen to Abang reciting the surahs that he has memorised and Tok Ayah Pa is always saying how pandai Adik ambil hati dia....Once, Adik let him clipped her fingernails ( it is one of his favourite thing to do since we were small and how we always ran away whenever we see him with a nail clipper ) despite knowing that his sight is not really good anymore. He, naturally, cuts too deep and Adik suffered in silence so as not to offend him. Mak Tok found out and scolded Tok Ayah, warned him to stay away from nail clipper and other peoples fingernails......And Adik gained recognition from Tok Ayah!!
Posted by Elham at Wednesday, November 05, 2008