October 2012 began with me getting one year older (and hopefully wiser...)
We were rejoicing over the fact that finally, my eldest brother ( your Ayah Long), is able to make the long-awaited spiritual journey to the holy land. It was a joy to all of us because it is the very wish of the late Tok Ayah. He used to fret and fret over the fact that Ayah Long is getting on in  years and being showered by so much wealth by Allah yet he still couldnt extricate himself from his busy schedule to  go and fulfill the 5th pillar. Yes, Tok Ayah couldnt witness it with his own eyes, but by Ramadhan, it was almost sure that Ayah Long and Cik Long are going and Tok Ayah was so happy...And he was made happier to see how Ayah Long has been trying to improve himself spiritually as a preparation for the journey.

Out of the blue, Abah  got a call that he was chosen too, and he was to go in less than two weeks time! Even earlier than Ayah Long himself. We were not really surprise though, knowing fully well about Abah's ongoing research project with the pilgrimages. It just that we were not prepared. Okay, it's me who was not prepared. I was supposed to feel thankful that Abah got to do haji again for the fourth time, but being weak as I am, I felt quite the contrary, astaghfirullah...

So, Abah went, and the rain started. Heavy rains as if the monsoon has decided to come earlier. And I was feeling doubly blues. No amount of whatsApp messages,viber calls or tango video calls from Abah could ease it. Yes, I was that mushy...

But, 20th of Oct arrived and brought Abang off the plane early in the morning. And I was cured!! And even the week long rain stopped too. It was shining ever so brightly on the day we made our qurban at Ayah Mat's. Adik was happy that Abang's home as she wouldnt have to walk to the main road to wait for her school bus every morning. Whenever Abah is around, Abah would send her on motor bike, and now Abang is  taking over.( It was just a short distance really) As for Abang, riding motorbike is a newly acquired skill, happened during the last Eid ul fitr holiday. He has been wanting to do that, seeing other younger boys, with  legs so short they cant even touch the ground when they are on the bike,riding around the kampung joyously. He didnt ask because he knows fully well our stand on this kind of things. But then, after seeing how tall and strong he has grown, and we could see he is now capable of handling it, Abah gave him a lesson, with not much success though, as I kept yelping nearby...(bad mama, I know)Then Aqim came and within a few minutes, Abang was confidently riding!

So, he really looked forward to coming home this time around as he knew he would get plenty of chances to ride. To the mosque five times a day, send Adik to the bus stand, taking out thrash to the dustbin on the main road and go buying this and that for Mama. All these trips are of course done on small paved road away from the main busy road. That's a strict condition put by us that he has to go by. No main road until he got a license. He has to park the bike on one side of the road and walk across to buy something as most of shops are on the other side of the main road . Abang said he felt like a real grown up now!! And kept saying thank you's to Mama for giving him the chance... Thats just like Abang. It was me who should be thankful of you. Abang did a lot when he was home...and at Mak Tok's too. Both Abang and Adik vacuumed and mopped up Mak Tok's floor until it shone. MasyaAllah I was so proud of you two, Alhamdulillah...

It was one  satisfying, fulfilled week  when Abang was home. Managed to cook many of his favourite dishes too...Adik was so happy that Abang,during their evening cruises,  taught her to ride as well, without my knowledge of course, as I would never agree to it!! The highlight of the week was when  Abah told us to catch him on TV al Hijrah as he would be interviewed on a live program. As we dont have satellite tv, we hastily downloaded the 1MalaysiaTV apps and watched him on the tablet...here's Abah. 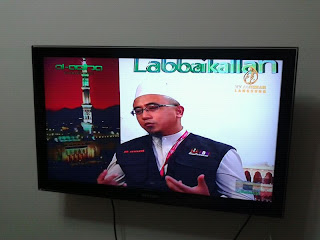 Thanks Kak Chik Illa for the picture...we forgot to screen capture any of it as all three of us were busy gazing longingly at Abah! When Abah called later, the first question Adik asked Abah was,why didnt they put make up on you!!!