Two days ago, Adik and me found ourselves suffocated amongst people and books...

Yes, we were at the 2012 International Book Fair at PWTC. With a nod from Abah when asked whether we could buy just about anything we fancy, off we went high-spiritedly.

We were staying at Sunway Putra Hotel which is just across the road from where the fair is taking place. And  Abah has taken me the day before, so there's no wonder here why I was so brave as to go without him. Adik didnt join us on the first trip as she was having fun at the ice-skating rink with Kakak Rahil, Kak Iybah, Kak Maryam, Aqim and others. As for me, I didnt have chance to actually look at  'my kind of books' as I was following Abah on his medical books shopping spree! Yes, a spree it really was as he got to spend thousands and thousands of RM on his choice of books....Mind you, not one cent came out of his own pocket though. He was buying for HUSM library!!  Still, I was green with envy...All those serious books were on the 3rd floor and we spent almost the whole afternoon there. I fancied some books on nutrition while tagging Abah but as they were newly published books, there were no discount on them. Abah, on the other hand, didnt even have to look at the price tag!

Adik screamed when she heard that we went to book fair without her...Fret not Adik, I said...we are going again!!

So, there we were...Adik went quite crazy picking this and that books and Mama was quite cool as I have more or less made up my mind the day before of what to get.

Here are some photos for you to look in future Adik...and to show off to Abang, hehe. 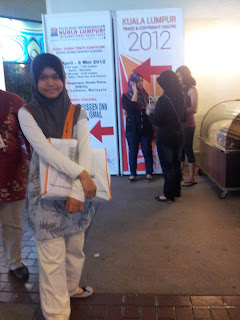 Oh, me and my family went there too, just last weekend! My mom has been wanting to go for sooo long and finally this year we made up our minds to just go.

And yes, it was packed with people but being surrounded by books made everything so fun. I wish I could spend without looking at price tags too though.. hehe.

I can see Black Beauty there! It's one of my all-time favourite. Such an interesting yet thoughtful perspective.. of a horse! Hope you and Adik will enjoy it :)

Azie,
I was there on Friday afternoon with hubby and on saturday morning with Adik.
Black Beauty is my all time favourite too...masa kecik2 baca the malay translation in Dewan Pelajar.
The Puffin Classics are actually what trigered me into learning english.Love all of them...and you know what, I tumpang sekaki plk baca black beauty ni...and I cried buckets again!!

Books and cinnabon!!.. can't go wrong with that.
You have a lovely blog, tabarak'Allah.

And you are so talented MasyaAllah Sketched Soul!!!
And your charity projects are awesome...