So, its already 2011......and the talk of going green is everywhere. Caught some people by surprise too when they were denied the usual  free plastic bags in the stores nationwide on the new years's day itself. Not us though, Alhamdulillah, as we have started carrying our own reusable bags in both cars since last year. And early this year I have started putting some tupperwares too in the carboots for tapau purposes.

I took a green quiz ( yes, I do those kinds of things when I am  bored) and was told I am only fairly green..huhu..compared to these people that is. But to our close relatives and friends who visit our home regularly, I am the Green Woman...
They learn to put  waste in the designated receptacles to avoid listening to my little speeches of biological and non biological waste, bla,bla,bla....
Some do made fun of me over this..but, being utterly a good sport as always (ehem), I took them  all in  stride.
Just recently, Tok Ayah Pa was hospitalised for heart ischemia and your uncles and aunties all balik kampung and  camped at our place. When they were gone and we tidied up the house, as usual, we discovered the few things  left behind. Adik, as usual,is very good at pointing out which stuff belongs to whom. So, amongst the things we gathered, there was this eerr... a tired-looking, well-used  nursing bra...and Adik guessed the owner. So, we called her and asked, she screamed and we laughed . And then, without missing a beat, she said;
" Sis, dont bother keeping it , just toss it in your compost heap. That's my contribution towards your green effort".
HAHA!!

Okay, so I'm not green enough, and will try to improve...but not to the extent of calling myself a greener or greenist... I think it is funny and kind of taking things a bit too far.  I would never bake  egg shells, blend  and feed them to the animals. I would rather just crush and throw them onto my inproper compost heap. ( yes, you gotta crush them, otherwise it'll be ages before they breakdown.) We dont want to consume more energy in the name of recycling, do we? And we definitely dont want to incur more cost in the names of going green. Some people even thought recycling is counter productive.

So, I say, we do things in moderation, shall we?


We, as a family has agreed to be green in a practical and as natural a way as possible. And talking about natural, nothing can beat this;
In India, we noticed that people are naturally environmentally friendly. In wet markets,no plastic was used at all.Maybe out of poverty...but I saw many  ingenious ways of doing things that we simply dont do here. Wrapping meat in its own omentum( some kind of membrane) is a novelty to me. Though Adik said, she felt geli...


And look at this bowl....
As they used two layers of them,post-eating, Adik put the outer dry layer on her head as hat! 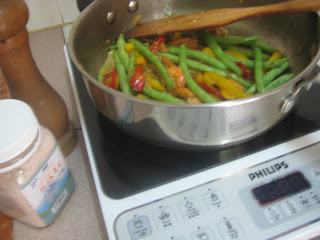 Back home,we have  started using more of the induction cooker since learning that it is the most energy-efficient way to cook. By focusing  heat only on the pan  as it heats up via an electromagnetic field, it is able to cut down cooking time by 1/3.


And we shop nearer to home now to save energy needed to fuel the car and cut down pollution too. It helps a lot that the particular  mall provides oxo-biodegradable plastic bags for those err...green ignoramus.

We try to eat more fresh sardines (ikan selayang ya anak-anak). Apparently, environmentalists all over the world give this humble fish a super green rating due to the fact that  they are very sustainable species and are fished in environmentally friendly ways. Mature sardines  are able to spawn between 6 to 40 times a year, thus making them  able to rebound from overfishing. As a bonus, fresh sardine is rich in antioxidant and omega 3 fatty acid. As for their small soft bones, they are rich in bone-building calcium. Excellent source of vitamin B12 and D  as well as selenium too. And yes, protein of course...


Meanwhile, Abah's take on going green  is by practising more sunnahs in our daily life. Eating with fingers instead of using cutleries save on  water and dishwashing liquid. Ditto by eating together in one large plate . And having a simple meal while at that.  Use miswaak instead of toothbrush...no plastic is used  and totally biodegradable.( which reminds me to put a miswaak in my handbag to be used during ablutions on the go..psst, its one of my 1432H resolutions) And oh! the benefits of using miswaak...it needs an entry of its own. Luckily I found this site, so, go check it out....


And just so you know, Grey, as a member of our family, does her part too in this so-called green effort . How? By doing away with the litter tray and does her 'business' in the backyard... Good on you Grey!!

Have to admit I'm one of those people who take Go Green very lightly but have been inspired after reading about your green efforts. I'll take small steps soon and may them develop into more significant ones, insyaAllah.
Now that I noticed, even your blog is green. What a green family you and your family are. Alhamdulillah. :)

glad to know that someone is actually inspired by this kelam-kabut write-up...though we ourselves are still in baby steps stage in this green thingy...still using lots and lots of plastic.

thanks for the do'a....and may Allah gives you strength to fight whatever/whoever's bothering u now. Seek Allah's help with sabr and solaat.

I will, insyaAllah. Thank you.

Very interesting story on your green efforts. I've been persuading my hubby to stick with me with my little green effort but he's still uncooperative - minta buat simple compost heap. I'm quite alone in this.

Alhamdulillah my hubs is quite rajin, it just that he's so busy...as for compost heap,mine selalu kena 'sabotaj'!