THE WEEK THAT WAS...

It was one delightful week.... Alhamdulillah. Abang was home from 13th to 20th and we enjoyed every single  minute of it. Saw lots of relatives, attended oh so many kenduris, ate loooots of food ( Mama gained 2kg huhu) , not to mention huge doses of  talking and laughing.
But for Adik and Abang, nothing beats the pleasure of being surrounded by cousins. And Alhamdulillah, almost all of your cousins from Abah's side were home and many from Mama's too.
When Abang arrived, Tok Nazi, Kak Shara, Abang Halim and that adorable Rayyan were  already here. Rayyan was inseparable with his life-size Barney. That prompted Abang and Adik to dig out Abang's own Barney that was also inseparable with Abang about 7 years ago. We were in Sydney at that time. It triggered happy childhood  memories of  our dancing in a circle while singing to Barney's song of I love youuu, you love meeee.....and ends up with BIIIIGGG hug!! We had fun singing with Rayyan.
We sent them to the airport the next day and dropped at Tok Ayah Wahab's to find the compound filled with cars from Kuala Lumpur. All the cousins were here!!! It felt like Eid.
There was an awkward moment at first when Abang met Akim, the most-missed cousin. Akim, as usual, straight away jumped into the small stream behind Tok Ayah's house as soon as he arrived, closely followed by Zaid. It was nearly 12 noon. Soon, Aman and co arrived and joined in the fun. Abang was in a  dilemma.  To join or not to join....He desperately wanted to stick to his routine at the madrassah, keeping in mind every word of his ustadzs's. He dilligently did his daily recitation, dhuha and tahajjud besides doing loooots of khidmats...and  play time is always after asar!! Abang finally opted to sit in and listened to the conversations of Tok Ayah, Pak Uda, Ayah Man and Ayah Yi though  his minds was with his cousins having fun under the sun...

And I'm ever so proud of you Abang for your perseverance.
But, he crumbled at last when we were going home and Akim refused to come with us despite being asked to by his own mum. I saw  a fat tear rolled down Abang's cheek. Akim and Muslihin are always his favourite cousins, being the same age and all. Those are the two cousins Abang always look forward to see during every holiday. It was bad enough that Muslihin's madrassah in Kubang Bujuk was not on holidays, now Akim  was also not agreeable. I tried to console Abang by saying maybe Akim was feeling a bit ill at ease with Abang's strict adherence to his maahad's rule.
Anyway, all things went well after that. Akim came later and things were never better.
Adik's sanctuary became very popular.
Grey never left Abang's room. It was amazing watching her jumping wildly upon  seeing Abang. I never thought she could be that clever. Sowwy Grey....but you always seems to have this couldnt-care-less look on your face!
I cried the tears of happiness when I listened to Abang's Qur'an reciting. Subhanallah! It was so beautiful...almost perfect tajweed, excellent pronounciation of the letters and all. I never thought he could achieve that in such a short span of time. Not that I ever underestimate you, but it surpassed my expectation. The next day, Abah and Adik took turn to do tasme' of the surahs that he had memorised. Adik was so inspired that I found her doing her own tilawah more carefully now, trying to imitate Abang. We are so thankful to all his ustadzs for their patience and diligence in teaching our beloved Abang. May them get the most bountiful rewards from The Almighty.
We were supposed to go on a trip to Pulau Redang with Mak's family but a couple of days before the holidays started, Wafaa had to undergo an appendectomy, thus the plan was aborted. To make up for it, we had a picnic with Umi's family at La Hot Spring in Jerteh. It was a lot of fun!!
Abang and Adik also had fun listening to 5-year-old Naqib  reading the Bawal books. They made a video of it and after Cik Jah and family went back, they kept playing it and laughed their heart out everytime. So, you had  conveniently forgotten how you two also read in that way not too many years ago!! 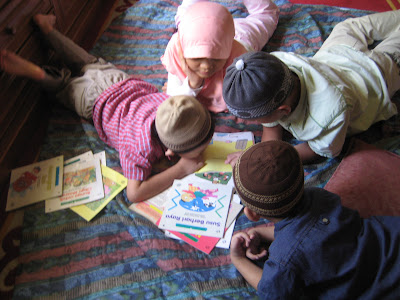 All in all, it had been a fulfilled week....
Came Saturday, Abang took off  with Tareeq's father around 9.00 in the morning. The house became unbearably quiet . Adik slept if off until midday...and Mama cleaned up the house while Abah had to go to the hospital and then off to do nusrah at one jamaat.
We thought all of us were doing well. No tears during the goodbyes. Abang was smiling brightly and we were joking about something.
During the taalem, there were only Mama and Adik. Suddenly, Abang's absence was  profoundly felt. We missed listening to his careful reading (very much different from before)  for the past few nights. Soon as we recited the kaffarah tasbeeh, Adik literally dived at me and the dam was broken....So much for being cool in the morning!!
Posted by Elham at Tuesday, March 23, 2010

Asalamualaikum to you and your family.Alhamdulillah coz Allah has blessed you with 2 obidient children.As for Abang I envy you for having such a good and brilliant child.Don't be too sad, the next break will come soon....

Salam,
Tears are in my eyes...I know how both of u feel...all of my children pun bwt pengorbanan yg sama...berpisah2 di dunia yg fana untuk berkumpul di syurga yg abadi...aamiin...

Seorangnenektua,
Wa'alaikumussalam wbt...
The feeling are mutual...I envy you for having grown-up children who are all having fikr on the work of deen...masa kecik ni semua obedient je,but I hv seen ramai anak karkun yg masa kecil the exact replica of mak ayah, dah besar, totally changed!! You are the lucky ones...plus, they all seems to hv a great sense of humour!! ( yg ni pun sure ikut mak ayah mereka jgk kan?)

Umma-ali,
Salaam to u too,
I'm sure you do...having gone thro this times and again. Wish I hv your strength...Amiin to your do'a, and Jazakillah.

Salaam,
its amazing how the simplicity of your narration got me touched at the very beginning. So lets not discuss what happened by the end. :P

I think the pure hearts like Abang's and Adik's is one of the reasons for the strong will and the easy immersion of ilm. Alhamdulillah.
And congratulations to you and husband for bringing up such wonderful kids.

Salaam to you too Azie...(and others too)
I'm sorry if my writings have misled you people into believing that my two kids are all good and wonderful...of course they are not!! They have their fair share of not-so-wonderful antics whatever...

So, thanks Azie, for your kind words,but your do'as for hidayaat for us will be much more appreciated!!

And you are one naughty girl...keeping us in suspense of where hv u been to! But I guess u went somewhere cold,am I right... pray tell!!

Kak An, you are just being too humble but that's why I like you a lot. As always, I'll recommend you to be an author, hehe.