Three days after coming home from Seoul, we went to Penang to fetch Abang. The madrassah gave all students 5 days leave for Eidul Adha. He raced towards us and hugged Mama tightly...(in front of so many onlookers!)

Mama: "But you said you didnt miss us at all!!"

Three weeks before, exactly a week after being apart, we called him at the school......

Abang: "Everything’s good. I like it here very much."

Adik: "Abang, I'm sure you think of me all the time, arent you??" ( confidently)

Abang: "I guess…but somehow I’ve forgotten how you look like."

I was highly perplexed… how could my only son who is soooo manja does not miss me at all!!!! And... I must admit that I was a tad sad. Abah was amused…. done with laughing at me, he pointed out that I should be relieved that he is adjusting well. Was I not so worried that he would be home-sick, not eating, not talking…. being morose in general? Yeeeesss, but, but….not missing me at all!! That’s too much…. Well, I am one fickle-minded, vain mother, I guess.

Mama: "Do you crave for my cooking? ( still vain) Tell me what you wanna eat, I’ll cook it for you…."

Abang: "There are a lot I want to eat, but we are not suppose to follow our nafs, said our ustaz ."

Mama: "Oh… okay….,buuuut, I am offering you , you didnt ask, and you wont be home again until March next year. You are so thin anyway, you need to fatten up, bla, bla,bla…" ( bad mother..)

Abang: "Okay, I want to eat lasagne, any pasta with bolognese sauce, trifle, that fruit custard pudding, that white kueh......(the list goes on and on....)ogo on and on…)

Alas, he was home only for FIVE days…there wasnt enough time to cook and eat everything….

Abang is crazy over all things pasta.... 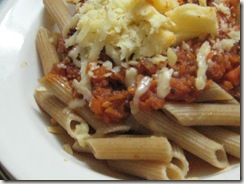 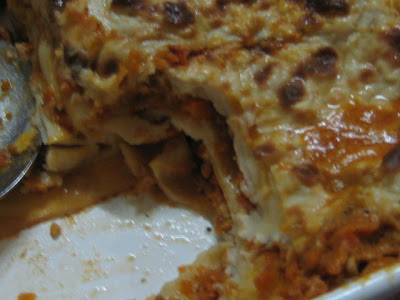 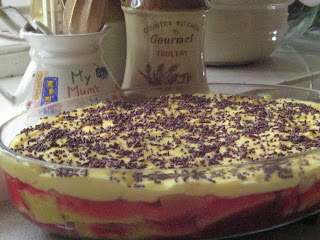 The trifle that Adik tried to ‘beautify’ by sprinkling chocolate rice on top…....

On the second day of Eid, we had qurbaan at our place where Abah slaughtered two cows shared with Abah and Mama’s siblings, plus Tok Ayah and Tok Su. After dzuhur, Abang had to leave for school again……

Alhamdulillah…thank you Allah for choosing my son to be there in that madrassah. He didnt miss a single day of tahajjud for the whole time he was home. Insisted on dressing according to sunnah and doing khidmat all the time . Being young and innocent, he seems to absorb every word of his ustadz. He may not understand the depth of everything his doing now, everything is because ustadz says so. And Alhamdulillah, the ustadzs are giving good tarbiyyah while being understanding to the needs of the young lads. Abang now is convinced that he’ll look more handsome only in Sunnah attires. He said he didnt miss me because ustadz said, you need to forget everything in order to gain ilm. And everybody in school is good because we are not to talk about bad things of others lest all our good deeds will be wiped out.

I earnestly pray to Allah that He will grant you the taufeeq to grasp the true meanings of all good things you are doing now and be steadfast therein for the rest of your life. Abang, we all love you soooo much and we are glad that you are so happy over there……..
Posted by Elham at Tuesday, December 08, 2009

Subhanallah
do pray for my future kids that he/she will have the same manner like ur kid have..

i wish to link ur blog.. thx

Thanks for visiting here...InsyaAllah, you'll have better children with u being involved in the work of deen at a very young age...may Allah gives you the taufeeq to be istiqamah in it....

insyaALLAH
thx for ur doa

One of my strongest reason for blogging is so that my future husband, children (and perhaps the next generation) could get to know me by my writings. And so I find your blog to be so touching and sweet as you have that same purpose. I have no doubt you are a fantastic Mama.

Is Abang at the Madrasah Balik Pulau?

Thanks for coming n reading me...I actually feel a bit embarass thinking that other people( apart from those who know me in real life)are reading my writings which sometimes dont really make sense...

I've gone thru some of ur jottings...you write good! May all your good intention materialised soon...(hubby,kids..hehe...I like youngsters who think of marriage so early in life, like the guy above,Yard.)

And no, I'm not a fantastic mama,far from it.

But yes,Alhamdulillah, Abang is at Ma'ahad Darul Furqan , Balik Pulau. You're from that area?

I know how that feels. (being embarrassed about outsiders reading your blog). And I do read random blogs regularly but what I dont do regularly is comment on them. Only chosen one like yours. :) I even read until your very first post hehe that's how much I like your writings.

Thank you so much for your doa. I need it :P

Ohh, I have a cousin there and my father has something to do with the madrasah management. Reading your stories, I think Abang is one very well-behaved son. Alhamdulillah.
It is my dream to have children of hafizs and hafizahs like yours, InsyaAllah.