I have noticed that nowadays Abang talks to Abah more than to me. Gone are the days when he asked me just about anything…which used to irk me sometimes, especially when he asked medically-related questions which clearly could be better  answered by Abah. I never thought that I would miss it now that its gone……Silly me, now I feel a tinge of envy whenever I saw him having a low-tone conversation with Abah. He looks so grown-up, speaking in that manner….. 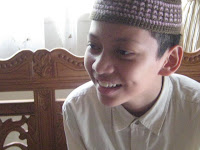 He used to come home from school and regaled me with the words of praise from teachers. Always a model student ( in akhlaq matters, not academic!! he got 5As in UPSR trial though), he was once crowned ‘Pelajar Mithali”. But, he is reluctant to indulge in that kind of talk anymore, though, from Adik, I could still hear the good words on Abang in school, and amongst his many admirers!!
Up to now, the 6th 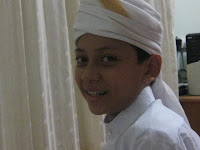 Ramadhan, he is still maintaining the 20 rakaats of taraweeh plus 3 of witr at the masjid ( and wait for the ‘moreh’). Abah would come home right after taraweeh as he prefers to do witr on his own and to partake dinner as he has been having iftaar of dates and drink at masjid and would only have dinner after taraweeh to avoid sleepiness. While we are eating and chatting, we could hear him coming home, closing the gate, opening the door with his own keys, gives salaam and lock up the door, checking the bolts and all. Abah and me would smile to each other. I, for one, cannot help having this swell of pride inside me. You are so brave, matured and responsible…….
From the deepest of my heart, I thank ALLAH for giving you to us…..you came to us after 10 years of waiting, hoping and praying. Indeed, Allah answers the prayers ( in HIS most mysterious ways) after we have reached the stage that we were certain that nothing could make it happen except when HE ordain it to happen. We have resigned to the fact that we might never have children, and strangely, were feeling okay with it. But, you came and Subhanallah, you were everything that I always dream in a baby!!
Growing up, you have fulfilled many of our dreams. When you were just a toddler, Abah would say, “lambatnya Habri besar, nak bawak naik motor pegi masjid”. It soon happened…and when we moved to our own house, the mosque is nearer, so Abah and Abang would either cycle or walk together to the masjid. In manners too, you are what we always hope in a child. Our many relatives will testify to it!! Getting bigger and taller, you take over many of our tasks at home, making life much easier, more so as you would do it willingly on your own accord. Almost everything that we hope you would do, Allah has given you the taufeeq to do it…..
And now, is the biggest dream of Abah….and you are about to embark on the journey to fulfilling it. MasyaAllah, though we never impose it on you, you have finally decided by yourself to embrace it fully and happily. The nightly readings on the virtues of ilm and Qur’an( among others) has once again proved to be fruitful.
This melancholic writing actually came out of this……
I have been feeling sad and have been crying from time to time. Sometimes alone and sometimes with Adik or Abah when they care to layan an emotional me…huhuhu…
My beloved boy will be gone from home a few days after Raya!!!
The madrasah he is going to attend will start on the 10th of Syawwal. I am now imagining life without him….no more tens of daily kisses from him. He kisses me before and after every solat. Going to the mosque, kiss-kiss, coming back, kiss-kiss and hug, going to school, going to bed and going anywhere, must kiss Mama first…No more massaging, no more extra hand in household chores, minus one taalem reader at night, no man in the house when Abah goes out-station, the list is endless……
I A.M S.O G.O.I.N.G T.O M.I.S.S H.I.M !!!!
O Allah, in this month of barakaat, I ask Thee for the strength to face the separation…and please accept our beloved son, the apple of our eyes, to become the hafeez of Your Holy Book, the ‘alim that will benefit many and the da’ie that follows the path of the holy companions r.a….

As Anne (with an ‘e’) from The Green Gables would say…..
“Abang, your coming to our life has made our cup of happiness to be full, and Adik, when she arrived two years later, has caused it to overflow……”
(must mention Adik too,nanti ada yg merajuk) 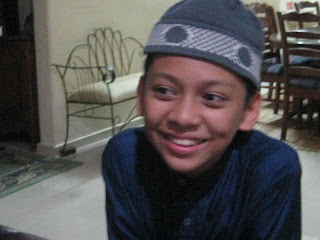 Alhamdulillah….(feeling a bit relieved after writing this….)
Posted by Elham at Thursday, August 27, 2009

I opened ur blog the minute i got ur txt..expecting to smile at the end of reading...but now i too am having watery eyes..

Honestly I dont know what to say to make you feel better..all i can say is sabar...i know it must be heartbreaking for you after having abang by ur side for the past 12 years..but be comforted in knowing that he will be embarking on the journey to being a hafeez and alim insya'Allah..

kak, after all these years , everybody have been coining the phrase "bertemu dan berpisah kerana ALLAH". this situation is the same. Anak adalah amanah. Kita menjaganya kerana ALLAH and kita melepaskannya kerana ALLAH. i remind myself if you love someone, let him/her go. Let the ones that we love go and embark on their own self fulfilling journey.Let them make their own mistakes and grew up because of that. But it is and will never be easy.I pray a lot for my daughter when we let her go to MTS. Heart-wrenching and i could not smile for weeks.But everytime i read the Quran , i will remember and pray for her and her ambition to be a HAFIZAH.Whenever I read the quran, I prayed for her specifically. I grew calmer.Kak, he'll love you always.Never a moment he won't think of you. But he will remember mosy your smile when you let him go. Smile akak, you are blessed...

Thanks Ina...its comforting to hear from someone who has gone thru it...I still cry though...I dont know,maybe its just the hormone playing up or maybe bcos its Ramadhan , the blessed month which never fail to make our hearts softer, easily moved and tears do flow ever so freely.....

"Sod-ba-ra, jim-mim-ya-lam"
Nothing can cause more sadness and bring tears to eyes than parting with the ones you love--what more a son! For years you watch him grow up, taking care of his needs and what not. I'm sure to understand though not yet a mother. Parting is hard. But look at it of a glass half full, it makes life better inshaAllah.

Knowing and believing that he'll bring more positive things in not just our lives but others out there as well, won't it make you feel calm, proud and grateful?

I'll be missing him too, my lil Habri.

Been missing you and everyone back there.


love,
kakak
p/s: mama, I'm very proud of u. been shring your writings with my friends..:)

My favourite niece!!!
Thanks for the understanding...and for the nice words.

Raya nanti balik lama skit ye, and make sure to spend at least one night at our place ya...this year might be the last year u can 'touch-touch' Habri. He's reaching puberty soon.Maksu Pah came few days ago and took the oppurtunity to hug n kiss Habri for 'the last time' before it becomes haraam to do so...He's 1 inch taller than me and starting to naik jerawat...he looks a bit different now, you'll notice.

Wa'alaikumussalaam Fadhli,
Alhamdulillah, berkat khidmat ikhlas u kat RS and the heroic deed of taking care of ur brother, Allah bukakan pintu rezeki yg u really desrve...
I'm still helping out kat RS, infact this whole week fatihah cuti and i'm 'on-call'. Time dia keja pun, almost e.day she will either called me up or came over to see me...tok leh spenuhnya lg...
RS tak buat open house, but usually will buat majlis buka puasa where all JKs and volunteers will be invited. InsyaAllah, u'll be counted if ada tahun ni,Joy havent mentioned anything yet though....

oh dear sincere sacrfice of a mother is so heartfelt until u made us cry with u too.. berkat korban saorang ibu only Allah knows what great rewards await u and your family..

And a person like me can only hope to be blessed with what Allah has blessed u with :)

I'll remember u and your family in my du'a, pls remember me in yours too..

Ramadhan kareem to u too Jannah,

...and thanks for the du'a. InsyaAllah, u'll be in mine too.