Yes I DID!! But, errr…only on camera , hehehe..And it wasnt even me who snapped the pic! It was Fatihah (the girl I’m training to replace me at the shelter home) who did it.

I was too astounded to do anything. It happened right smack in front of my eyes!!

We were walking towards my car, having finished the day's work at the office. I didnt get to see the actual ‘snatching’ action, but I saw the snatcher being chased, caught and handcuffed . It was horrifying watching  three guys chasing him, moving swiftly amidst the traffics and ended up tackling the snatcher face down in a nearby petrol station.

And the fact that one of them produced a handcuff….(it was like watching a scene from Gerak Khas ) .
Apparently,they were plain-clothed policemen who were actually patrolling that area. Unknown to me, the area in front of our office is actually one of the most targeted area for snatch-thief, thus the patrolling. 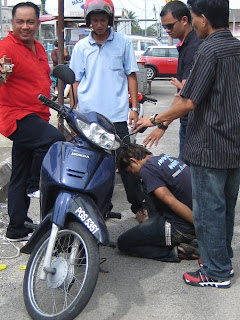 We actually had a lot of pictures and even one with his face right on camera but I dont feel right publishing it. And, oh, this guy was wearing a t-shirt with an " Impossible is Nothing" written boldly on the back....the other guys seen here (except the one in helmet) are the policemen.

I just cannot forget the guy’s face. I always have this image in my mind that a snatcher is a scruffy-looking, thin with an unkempt appearance…..but this guy totally did not fit into that. He couldnt be more than 20 years of age, have a strong body and surprisingly, good-looking. He looked just like your typical college-goers…..When he was caught, he got the gut to smile at people crowding in to take a look at him!!

People were saying that he was lucky the police were there, otherwise he would have been beaten to a pulp by the people.

I felt uneasy for the rest of that day……I told Abang And Adik about the incident, showed them the pictures and as usual, poured my heart out to them. I told them how sad/ashamed his parents would feel should they get to know of their son being caught snatching……

Adik and me were browsing the aisle of children clothing at Billion supermarket and it happened again!! And I saw the snatcher again. This time, surprise, surprise…..it was a teenage girl! Dressed in a white t-shirt and blue jeans. I actually saw her when she was running away after snatching a necklace from a 6-year-old girl who was trailing behind her mother. The little girl cried out of pain as her neck was bleeding from the snatching and it was only then her mother realised and shouted for help. One of the sales attendant gave a chase but lost her in the midst of weekend shoppers.

Nowadays, Adik’s hand is always firmly in mine whenever we walk in the public places. Not that Adik is wearing any golden ornaments, but , still, I dont feel safe anymore. I feel suspicious to all youngsters hanging around in malls, on the bikes at the traffic lights and everywhere….

I know we are reading/hearing about this snatch-thief almost everyday in the media, but when it happened right in front of you, you get some sort of rude awakening…..

All I can think of is, all of us must double our effort in amr maaruf nahi mungkar works….this is the only sure-fire way to combat all these bad things happening around us……


p/s yes, i have a new template, thanks to Kak Cik, the petite lady with many blogs, talents and professions....
Posted by Elham at Wednesday, June 24, 2009

assalamualaikum kak an. so this is the snatch thief story that you've told me that day. i hope that guy repent after this and may Allah give him hidayah to stay on the right path also for that thief girl. i think i'd have to be more alert now whenever i go shopping because i'm always shopping alone especially at billion.

p/s: are u going to follow the buaya above?

Saudara/i buaya,
thanks for d invite...but,err..I dont think we have much in common.


Kakchik/Niza,
ha, tu lah dia...and yes,please be careful when you are there, or anywhere for that matter.I do sembahyang hajat everyday especially if I have to go out of the house....Hanya Allah je boleh jaga kita dari segala bahaya yg banyaaak sgt dah skrg.
My answer for Mr/s Buaya above is self-explanatory to your question.

Ina,
hehehe,thanks....(all credits to Niza really)
Welcome back to blogosphere. I'll be expecting to see more of your creative juice flowing.......

we are so lucky to have you as a friend, a very close one and a sister in need and deed.

Ina and Niza, thanks for all the puji-pujian which i truly dont deserve....but since u puji, I'll belanja you all ,tunggu kak jae balik kb ya, we go eating together-gether...InsyaAllah,b4 ramadhan